there were hundreds of them...HUNDREDS OF THEM 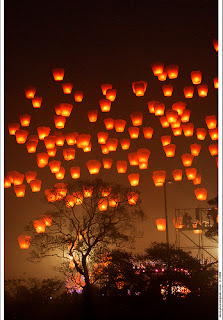 A few weeks ago I was standing on my front porch after coming home from a friends house, looking for the stray cat and kittens that we had been feeding.  It was dark out and I heard a neighbor down the street shouting something at me.  When I walked towards her , I heard her saying in a rather panic-ey voice, "do you see them?? There are hundreds of them, HUNDREDS of them and they are FREAKING me out?"  I asked, " see what? ", to which she replied, "THE ORANGE LIGHTS!  COME HERE, COME HERE!"
Well, I calmly walked down to her as she was pointing to the east of our street and yes, freaking out about the lights in the sky.  At first, I didn't see a thing, then three little orange glowing lights drifted over the trees.  "Hmmm," I said,"What on earth can that be?"  "Maybe satellites?"  "NO THEY ARE NOT SATELLITES!  She was quite annoyed at my calm demeanor. "Maybe weather balloons?"  "NO THEY ARE NOT weather balloons!
When several more filled they sky, I was really wondering what the heck they were, but I didn't think that they were aliens attacking earth, like my eccentric neighbor seemed to think.  I mean, as far as I know, people keep  track of what's flying around in US airspace, so the end of the world was not on my mind!
I called my son in law down who was now standing on our porch and he was offering some thoughts on what they could be, while "Belinda" as I shall call her was repeatedly saying, "IT'S FREAKING ME OUT, FREAKING ME OUT!"  My cell  phone rings and my daughter Jenny (real name because she is not a coo coo nut) called to say that she saw the lights and that they were probably wedding lanterns set off from a wedding downtown.  Well, "Belinda" was super relieved to hear a theory she could get behind but seemed to think my son in law solved the mystery and called him a genius.  (which he really is actually)
So my daughters and Rachel stroll down towards where we are standing and "Belinda" tells them, "oh your Mom was just sooo cool about everything, just taking her sweet time coming down the street while I was yelling for her to hurry up, looking at the lights and saying, aren't they pretty (said like a stoned valley girl) maybe they're balloons...just like a hippie on LSD or something"
Ummm, I never said anything like that. I was just not heading for my bunker. She said she thought that it was going to be the end of the world and that she was chosen to warn everyone else.  Thank goodness they were just wedding lanterns!
So...now she mocks me for being a hippie space out!  You need to know me a lot better to mock me, and even my closest family and friends don't do that!  She was outside my house the other day, walking her dogs and talking to my husband  and Jenny when I parked in front of our house.  I overcompensated when I parked because of where she was standing and I could see her  say something to them.  I later found out that she said "OH...baby needs help"
We all just laugh about how now I am the eccentric hippie to this lady and she is the eccentric freaker outer to me.
Oh the joys of South 10th. I swear they could do a reality show on some of the characters living here.

Posted by considerthelillies at 8:31 PM 7 comments: